From ZeldaMods (Breath of the Wild)
< Help:Setting up tools
Jump to navigation Jump to search

BCML (Breath of the Wild Cemu Mod Loader) is a mod installer and merging tool for BotW graphic pack mods. It can be used to install and uninstall mods by priority and merge conflicts in the RSTB, SARC (pack) files, or game texts.

There are two primary ways to install BCML. 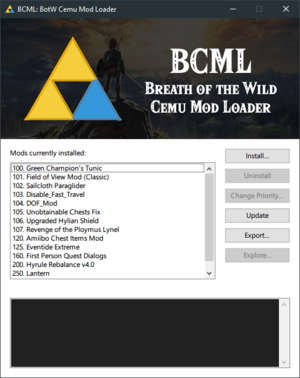 The commands between the CLI and GUI version are the same, for more information about them, consult the readme on GitHub. A basic overview:

Breath of the Wild