On September 14, 2007, Intel announced it had signed a definitive agreement to acquire Havok Inc.[1] In 2008, Havok was honored at the 59th Annual Technology & Engineering Emmy Awards for advancing the development of physics engines in electronic entertainment. On October 2, 2015, Microsoft announced it had acquired Havok.[2]

The Havok middleware suite consists of the following modules:[3]

Breath of the Wild uses the Havok Physics, Havok AI and Havok Cloth.

Used in shrines and field sections.

Used in shrines and field sections.

Note that this specification only applies to version 2014.2.0-r1 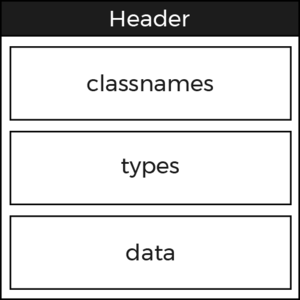 Each file contains a header and three sections: classnames, types and data

The classnames section (__classnames__ internally) contains a list of Havok classes used by the file to correctly decompile the binary data into a usable data structure.

The types section (__types__ internally) does not appear to be used by Breath of the Wild.

the data section (__data__ internally) contains binary data to be serialized into Havok data structures for use by the Havok engine.

There are optional header bytes for a long header. If Section offset equals 16, an additional 16 bytes are added to the header for a total of 80 bytes.

There are only three section names: __classnames__, __types__ and __data__. The section name is a null-terminated string with a delimiter byte (0xFF) in byte 20.

The absolute offset to the section.

The relative offsets point to different large structures within the section.

For example, given the following section header:

The absolute offset is the beginning of the data section, right after the class names.

This following tables shows to which sections the offsets are pointing:

The classnames section header includes the absolute offset to the class names data and a single unique relative offset to the end of the section. The section is made up of an array of hash ids and a null-terminated string class name.

Class names are read until the end of the section or a delimiter byte (0xFF) is is reached.

The types section is unused in Breath of the Wild. The absolute offset points to the beginning of the data section with all null (0x00) relative offsets. 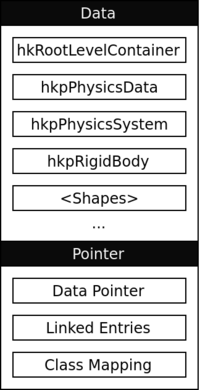 The bulk of the file is devoted to the data section which is divided into smaller segments dependent on the file type. All files follow a general structure as you can see in the picture.

Right after the header begins the data section which contains multiple chunks, luckily, the first four chunks are always the same.

After that, several more chunks can be found depending on the file.

The next section, at the end of the file, contains three different pointer arrays. It is used to connect the whole file together, and should be used as an entry point while reading the file.

The offsets to these three sections can be found in the header.

An array of offsets relative to the beginning of the data section, pointing into various chunks.

Which offsets ends up in this list, depends completely on the chunks used in the data section.

However, since the first four classes are always the same, the first 14 offsets will be the constant.

Contains pointer-pairs to connect chunks together.

Each pair has the following format:

To connect a chunk with another, a base pointer somewhere inside the base-chunk (depending on the class/type) is used as the first pointer.

Then, the target pointer is the offset of the beginning of the target chunk.

The last section contains the mapping between the chunks and the classes they are using.

They, again, use pointer pairs:

To link a chunk to a class, the data pointer is set to the beginning of the chunk.

The class pointer is set to the first character of the class name found in the header section.

This also marks the end of the file, if the offset is not aligned to 16 bytes, the rest is filled with 0xFF.

All known classes that chunks can use are listed here.